Financial Aid Made Princeton Possible for Me

My parents always encouraged me to go to college. Not only was I encouraged, but I was expected to pursue higher education. Not in a “We’re forcing you to go to college” way, but more of a “College helps you succeed and you will be successful” way. Nevertheless, I quickly realized that my current and future situation wasn’t like that of my friends.

My path to college was a little different. My parents didn’t go to college. My dad didn’t finish high school. My parents moved to America from Spain when they were 20 years old, not knowing a word of English and without a cent in their pockets. Sure, Princeton is the number one school in the country, and it’s part of the prestigious Ivy League, but there isn’t one specific way to make it here. 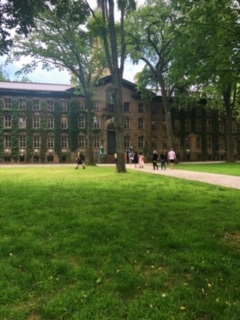 Many students at my high school would say that they were not applying to any Ivy League schools because of how expensive they are. My parents had heard the same thing, but they still encouraged me to apply; they said that college is important, and that, somehow, they would find the money. One of my mother’s colleagues had a son who went to Princeton, and she told my mom about Princeton’s incredible financial aid program. Suddenly, Princeton seemed that much more attainable.

My family and I visited Princeton for the first time during my sophomore year of high school and attended an information session about financial aid. There, we learned that aid packages rely on grants, not loans. This means that 82% of students graduate from Princeton debt-free. We also learned that Princeton has a need-blind admission policy, which means that financial need is not taken into consideration when making admission decisions. There’s even a financial aid online estimator, which allows you to input your financial information to see an estimate of how much your family would have to pay to attend Princeton. We were so excited; I have a twin sister, which meant that my family would be paying two college tuitions at the same time. Princeton’s financial aid would help make that possible.

When I was admitted to Princeton in December of 2015, I committed that same day. Some of my friends waited a few weeks after their admission to a bunch of schools so that they could compare the financial aid package received from each school, but I knew I wouldn’t get anything better than what Princeton was offering me. The financial aid office made itself so available to my family for any questions we had during the application and matriculation processes; since my parents had never done this before, we had many questions! Princeton’s financial aid made Princeton possible for me, and I’m eternally grateful.