It is people that make Princeton special. On tours, I always emphasize that Princeton’s incredible diversity—diversity of backgrounds, social and cultural history, socioeconomic status, interests, and talents—is what makes Princeton so special, it is the shared trait of intellectual passion and curiosity that unites students. It is the people--the smart and the curious and ambitious who drive Princeton.

But it is also the students that have come before us. As students at Princeton, we share the unique opportunity to move through the same spaces and embody the same intellectual values as the numerous generations of movers and shakers who have graduated from Princeton—authors, artists, Nobel Laureates, Supreme Court Justices and Presidents. Princeton’s alumni are people who have initiated, forged and ushered change in the world. Our time at Princeton is incredibly short. The eight semesters crammed into four short years spin by at a breakneck pace. And yet, for Princetonians, Princeton is much more than a four-year experience.

Each year, Princeton invites alumni to return to campus for Reunions on the weekend before commencement. While most universities host annual college reunion events, Reunions at Princeton are truly special. Each year, Princeton shrouds the entire campus in orange and black paraphernalia, erects dozens of towering big top tents that host Reunion sites across campus for the 25,000 alumni that return to campus for the four-day celebration each year. Princeton Reunions have become an institutional tradition, with some of Princeton’s oldest alumni boasting the number of consecutive years they have attended—50, 60 and even 70 consecutive years of attendance.

For Princetonians, Reunions are the truest embodiment of the “BLOOD RUNS ORANGE” enthusiasm for Princeton that most students and alumni share for our school. Princeton is at its best during Reunions: celebrating all the decades of students, faculty and administrators, who through hard work and loyalty have made Princeton the University that it is today. At Reunions shameless, flamboyant, and flagrant wearing of orange are not just encouraged but required. Alumni return to campus in droves—some returning to indulge in the nostalgia of their four, short years at Princeton, others to reunite with old friends, and still others to share Princeton with their children and families.

Each year, as alumni return to the “best damn place of all,” alumni and the graduating class participate in a ceremony called the P-rade. The P-rade consists of a mile-long parade of Princeton alumni that is led by the oldest returning alum and followed by every subsequent alumni class. In 2018, the oldest returning alumnus from the Class of 1923 led the train of nearly 25,000 attending alumni, culminating with the graduating Class of 2018. 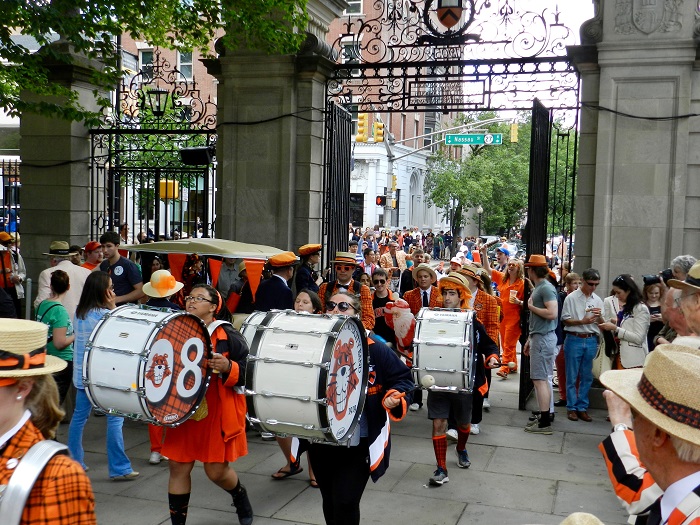 This year the class of 2019 celebrated its first Reunions. Although it doesn’t quite make sense that we celebrated our first Reunions the weekend before we actually graduate, it is an opportunity (the LAST opportunity) to share moments and memories with the entirety of the class with whom we’ve taken every step of the way.

The graduating class's participation in the P-rade at Reunions is in fact the capstone of the Princeton Experience. In a grand gesture of circularity, every Princeton student begins and ends Princeton in the same fashion—in a giant, orange parade through the gates of Nassau Hall at the front of campus.