My roommate calls the day the registrar posts classes for the next semester my “mid-semester crisis.” From that day, right up until the moment when I register during the last week of classes, I will spend unholy amounts of time planning, re-planning, rethinking and rearranging my course options.

My process, illustrated with screenshots from our schedule-building app ICE, goes something like this:

Students typically take four to five courses per semester. At the moment, I’m looking at majoring in either politics or the Woodrow Wilson School with certificates in theater and in Near Eastern Studies. I start with a few classes that either I know I’ll be taking, such as Elementary Arabic II [ARA 102], or classes I want to take badly enough that I’m willing to build the rest of my schedule around them, such as International Theatre: Plays & Politics [THR 382/ENG 382]. This semester, I’m also applying for Creative Nonfiction [JRN 240], a class that has a reputation as “life-changing” (that phrase appears multiple times in the course reviews), so naturally every sophomore I know with any interest in that kind of writing is applying. 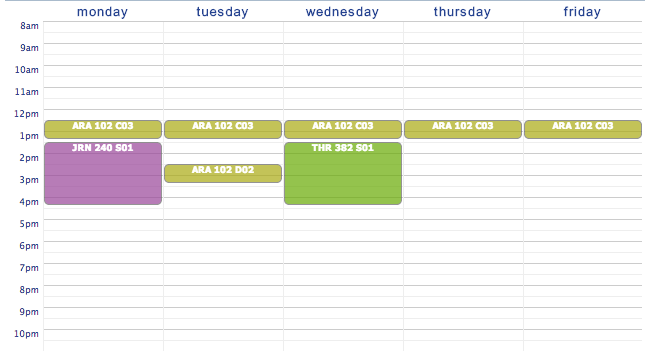 From there, I essentially add any course that I could vaguely see myself taking the next semester, as long as the course doesn’t conflict with my core. These might fulfill distribution requirements (Intro Psychology [PSY 101], Intro Linguistics [LIN 201/ENG 241]), simply pique my interest (Human Evolution [ANT 206A]), or factor into my major or certificates. 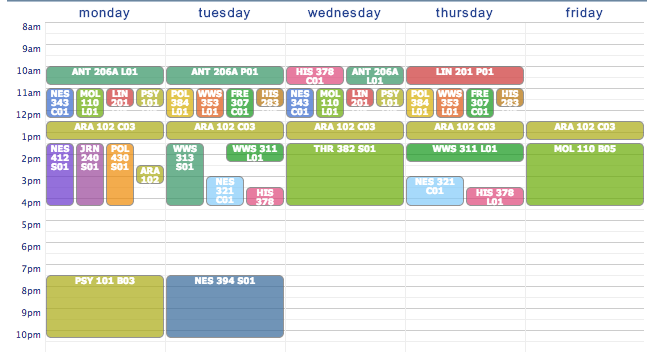 In total, at one point I was considering about 20 courses, which looks kind of intimidating until I start whittling down. Basically, I ask myself a series of questions. What courses will help me resolve which department I’d like to major in? What potential combinations give me a more balanced workload? Would I have too many papers or exams at the same time? Will I have too many classes in one day? Eventually, I end up with seven courses. 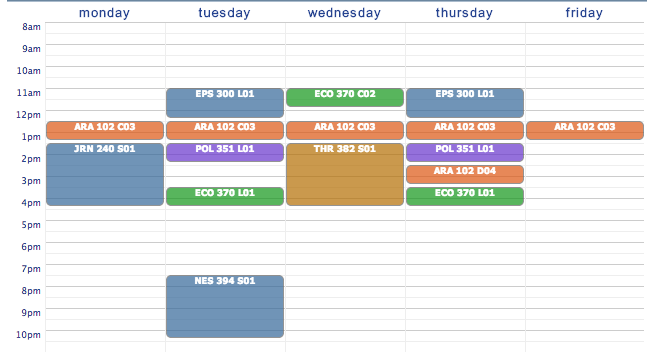 I took this list to my advisor to discuss further, and he approved of my selections. This time around, my schedule is somewhat dependent upon whether I’m accepted into the journalism seminar. For next semester, I’ve decided that I’m more concerned about resolving my major choice than fulfilling distribution requirements, so I’ve focused on classes that will clarify what I want going forward. Ultimately, I’ll probably register for six classes and then decide which one to drop after attending each during the first week.

Another course selection period over, another crisis resolved – until March, when I get to do it all again.

Course descriptions for these and all other courses are available online at the Office of the Registrar’s website.